Advanced Laser Endodontic Therapy – What is it?

Why is ALET Superior to Classical Root Canal Therapy?

There is no way classical root canal therapy can completely clean all the infection present in the root canals of a tooth.  Dentists usually think that it is enough to fill the main canal of the tooth and their job is done.  They can get a really good result for the main canal and miss the sometimes myriad of lateral, accessory and anastomoses (connectors) within the canal system of teeth.

The problem is the tools dentists have had available to them are not efficient and don’t remove all of the bacteria and infected, necrotic tissue inside the tooth.  You have all heard of the adage, ‘Use the right tool for the job.’  Root canals traditionally have been done with small hand files (pictured below).  Up till now, these have been the primary instruments available to do root canals and try to remove the necrotic tissue inside the tooth.  Now there is another way, more on this later.

How the Procedure is Usually Done 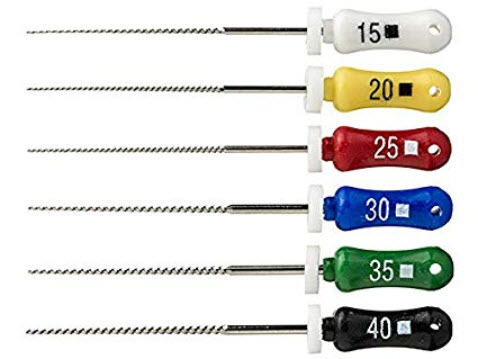 Here is a picture of the files dentists use during root canal therapy.  While hand files do a pretty good job of removing bacteria and infection from the main canal of the tooth, they do a poor job of removing the infected tissue in the other canals present in the root canal system.  The simple reason for this is that these files cannot reach these canals.

gine for a moment using one of the files to the left and trying to clean out the curved canals and channels in the tooth imaged above.  First of all, it is anatomically impossible for these files to reach all the canals present.  Secondly, the shape of the file does not match the shape of the canals present in teeth.  Rarely if ever does a tooth canal present as a relatively perfect cylinder, oval or circle.  Most canals turn and curve like a river, making it virtually impossible to navigate with these files.  It’s the way of nature. 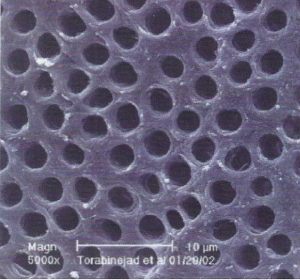 The third reason classical endodontics (root canal treatment) doesn’t always work is the microtubules of the roots.  Here is an electron microscope image of the root surface of a tooth.  See all the tiny holes?  These are microtubules which usually carry micronutrients into the tooth and house immune cells and odontoblasts that can lay down more tooth structure when necessary.   When laid down side by side, the microtubules will span a distance of 1-2 miles.  That is a lot of tubules!

In Weston Price’s groundbreaking research done a century ago and George Meinig’s book, ‘The Root Canal Cover-Up,’ it was postulated that the microtubules were actually filled with bacteria and contributing to the body burden of toxicity in your body.

Here is another image of microtubules, now filled with bacteria after a tooth becomes infected.  The reason this is important is that the metabolic byproducts of bacteria (essentially ‘bacteria poop’) is toxic to our bodies.  Some people with immune compromised conditions shouldn’t have root canal procedures done because of the additional stress it will put on an already taxed and stressed immune condition.  I have seen many patients with auto Immune conditions, fibromyalgia or Lyme disease who could not tolerate root canals.  For more information on systemic inflammation and root canals go to this article I wrote on the importance of checking certain blood markers before major dental work: Inflammation May Cause Failure in Extractions, Root Canals and Implants: A Case Study

To highlight the above points, I am going to quote what the Journal of Endodontics (printed by the American Association of Endodontists) has stated about root canals performed with four different nickel /titanium file systems.   To quote the article’s conclusion, ‘All instrumentation techniques left 35% or more of the canals’ surface area unchanged. Whilst there were significant differences between the three canal types investigated, very few differences were found with respect to instrument types.’ (1)

Possibly leaving 35% of the tooth surface untouched after root canal therapy is a staggering thought.  Imagine doing a root canal at your local dentist because you have an infected tooth and being told you’re good to go even though that the dentist was only able to clean 65% of your tooth.  Would you consider that a success?  I wouldn’t.  No wonder root canals fail as often as they do.  It’s because there is still bacteria left behind to fester in your tooth!

Thankfully, a treatment protocol has recently been developed that solves the two deficiencies of traditional endodontics mentioned above. Using the PIPS and SWEEPS modes of the na Erbium laser, virtually all the bacteria present in infected teeth is eliminated.  Let’s see how it works:

Take a look at the electron microscope images in this graphic.  On the image to the left, you see the bacteria that usually gets embedded into the microtubules of the tooth root after a tooth gets infected and needs a root canal.  On the second image, you see the microtubules after treatment with the Fotona laser in PIPS mode.  There are NO MORE BACTERIA in the tubules of the root!

Before now, we couldn’t be sure how much bacteria we were leaving behind when we did a root canal on a tooth.  How would you know, as you can’t see them on x-rays?  However, with the use of electron microscopy, we can actually show the microtubules and the fact that they are devoid of bacteria after using PIPS during root canal therapy.

This is absolutely a game changer and a paradigm shift in dentistry, in my opinion.  In my 33 years as a practicing dentist, I don’t think I have seen a more important development to resolve infections in the mouth.  This is why I am so excited about this laser and specifically the PIPS and SWEEPS modes to remove bacteria from infected teeth.  I think that Weston Price as well as George if they were alive today, would be as excited about this technology as I am.

Why PIPS and SWEEPS are perfect for healing root canals infections

OK, for the geeks out there like me who want to hear more about the technical stuff here goes:  In PIPS and SWEEPS mode, the laser operates on a super-short 50-microsecond pulse duration.  This combined with the specific design of the Erbium tip allows for the lowest possible energy per pulse and repetition rate.  This minimizes thermal effects and maximizes the propagation of the photon-induced photoacoustic shock waves on a microscopic level.

PIPS and SWEEPS are revolutionary laser frequencies for cleaning and disinfecting the root canal system.   The strategy of using PIPS when combined with traditional irrigation as well as ozone water has the potential to fully heal previously unhealthy and infected teeth. Once we eliminate the bacteria in the tooth, the body can still maintain a biological connection with the tooth through the periodontal ligament.

If you are local to San Diego, you can call Victoria and get set up for an evaluation with me to see if PIPS would help in your individual situation.  Call her at 760-632-1304.

To read more about laser root canals, here is another article on the subject:  Should I Treat My Root Canal Infection or Extract My Tooth.

ALET is an innovative approach to root canal therapy, now made possible through advances in technology and a bio-friendly new protocol.  It uses specialized rinses, ozone, and a dual Erbium/NdYAG laser to sterilize and sanitize the canals and tubules of the tooth and to stimulate healing.

Why haven’t I heard of this before?  Why aren’t other root canal specialists doing this?

While the Fotona laser has been used with good effect for about a decade, the specific protocol currently being used by Dr ORielly is 1-2 years old.  Most dentists haven’t heard of it yet!

Why is this different from traditional root canal procedures?

Traditional endodontic therapy is not able to sanitize and sterilize the complex root canal system in most teeth, let alone reach the myriad of microtubules in the roots.  For more on this see Dr. O’Riellys’ blog posts at https://myholisticdentist.com/blog/

Won’t I still have a ‘dead tooth’ in my mouth?

The tooth isn’t ‘dead’.  Although after root canal therapy the canals are filled with inert material, the ligament around the tooth is still viable and vital.  This ligament provides blood flow, nerve signals, and serves as a shock absorber for the tooth.  As long as it is viable and present the tooth maintains its biological connection to the body.

Why do I need two appointments for my ALET procedure with Dr. O’Rielly?

On the first visit, Dr. O’Rielly opens up the canals and clears out the infection.  Then he will give the tooth two weeks to maximize healing before finishing the procedure on the second appointment.   He finds that using the protocol twice only improves his results and ensures all the bacteria and biofilm has been removed from the canals and tubules.

Will I still need a crown?  What if I already have a crown?

If you already have a crown Dr. O may be able to go through it from the biting surface and maintain it by sealing it. Otherwise you will probably need a new crown.  Each case is different.

I read somewhere about Weston Price and his work with rabbits.   I also heard about George Meinig’s book and what he says about root canals.  What about that?

The conclusions of Price’s research and Meinig’s book was that it’s impossible to reach all the canals in a root canal system and open up the millions of microtubules in the roots.  Now with the Fotona laser, ozone and chelators like EDTA we can remove the bacteria and endotoxins associated with them.  Dr O’s position is that the body doesn’t have a problem with the tooth as long as you can get to all the bacteria.  Now you can with the ALET protocol.  Technology has changed a lot since Price and Meinig.   Dr. O’Rielly has discussed this in his blog posts.   https://myholisticdentist.com/blog/