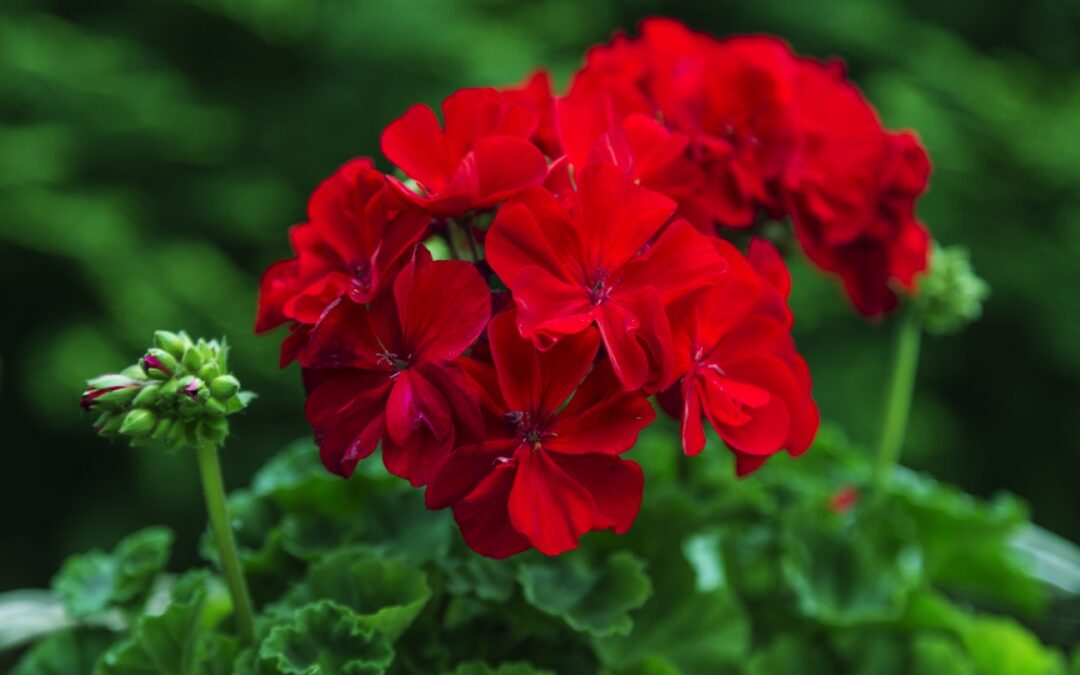 Geranium flourishes because of its hardiness and is popular because of its diversity. There are rose-scented, lemon-scented, mint, apple, orange, pineapple and sage-scented geraniums. Rose-peppermint, piney-nutmeg and oak are also among the many of varieties. Rose-scented geranium is often used in perfumes and cosmetics because it mimics the more expensive rose fragrance.

There are two types of geraniums, the ‘cranesbill’, is found on the south side of the Alps and elsewhere in southern and eastern Europe. It has been used for its therapeutic properties             from ancient times, particularly for the regeneration and healing of skin conditions. It was mentioned in the Greek physician Dioscorides’s De materia medica in the 1st century A.D.

Later it was catalogued as a medicinal plant by the English herbalist and physician Nicholas Culpeper (1616-1654). Also known as ‘wild geraniums’, cranesbills are perennials, named because the shape of their flowers resembles a bird’s beak. Cranesbills are more likely to be catalogued as herbal medicine for the constituents found in their leaves and roots. Astringent and tonic, they have been used to treat piles, internal bleeding and diarrhea.

However the type of geranium most commonly found locally is the pelargonium. The type of annual geraniums usually seen in window boxes and gardens is Geranium Pelargoniums. This type of geranium originated from South Africa and have a somewhat different-shaped flower. Although it was introduced into Britain in 1632, it was not until the French perfume industry utilized its fragrance in 1847 that it became better known. Victorian ladies brought the scented geraniums indoors and planted them along garden paths. When their long skirts brushed against them, their aroma was released.

Aside from the demand for its decorative uses, pelargonium geranium is valued for its uses as an essential oil. It is one of the most used oils in aromatherapy. Its fragrance helps to balance the emotions and ease nervous tension. It is antidepressant and antiseptic. It is also antispasmodic, antioxidant, anti-inflammatory, diuretic and hemostatic (stops bleeding). As a diuretic it also helps to relieve fluid retention and has a stimulating effect on the lymphatic system. Additionally, it is antibacterial, antifungal and improves blood flow. It is a stimulant for the liver and pancreas, it dilates bile ducts and revitalizes skin cells. Geranium oil is also an adrenal cortex stimulant. The adrenal cortex secretes hormones that regulate the balance of other hormones, including male and female sex hormones. This is of great benefit in stabilizing conditions where hormones fluctuate, particularly in pre-menstrual conditions or in menopause. It can also have a sedative effect.

● Use in a diffuser to calm anxiety and stress

● Put a few drops on a wet washcloth and toss in the dryer with sheets and pillowcases for a sweet smelling, more restful sleep.

● Geranium oil can be used neat, meaning it doesn’t require dilution. A few drops on the wrist inhaled periodically will boost mood and enhance a feeling of well-being.

● Geraniums may have begun their career in window boxes because of their ability to repel insects. It works best in a diffuser to repel mosquitoes and other bugs.

● Combined with oils of rosemary, lavender and eucalyptus in a carrier of coconut oil it can remove head lice.

● Combined with oils of ylang, jasmine and clary sage in a carrier of coconut oil, it can relieve PMS symptoms and amplify libido.

Disclaimer: This herbal health article is not intended to prescribe or diagnose in any way. It is not meant to be a substitute for professional help. The intent is to offer historical uses of herbs. Those who are ill should consult their doctor.