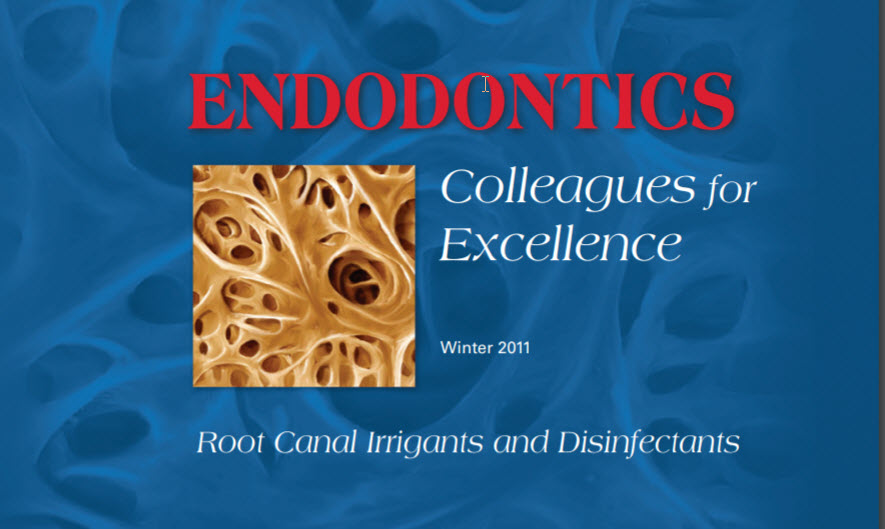 There has been a lot of controversy over the last decade or two about root canals.  The disagreement is usually between dentists and root canal specialists (endodontists) on one side and alternative practitioners, like naturopaths, Integrative MD’s and chiropractors on the other.  Dentists and endodontists almost always recommend saving the tooth.  Alternative doctors usually land on the side of extraction.

Sometimes, the patient gets caught in the middle of this disagreement in philosophy and treatment approach.  What is a patient to do?  Read on and I think you will be pleasantly surprised and excited to find a new solution to the inherent problem with traditional root canal therapy.

According to an article published by the American Association of Endodontists (AAE) in 2011, current root canal solutions and techniques fail to completely remove all irritants and bacteria from the tooth during root canal therapy.

The article discusses the complex nature of most root canal systems and why it is so difficult to remove bacteria completely from the canal system once it becomes infected.  If bacteria is left behind after root canal therapy is complete, this sets up a problem for the future health of the tooth.  According to the article:

Bacteria are the major cause of pulpal and periapical diseases. Complexity of the root canal system, invasion of the dentinal tubules by microorganisms, formation of smear layer during instrumentation and presence of dentin as a tissue are the major obstacles for complete elimination of bacteria during cleaning and shaping of root canal systems. The search for an ideal material and/or technique to completely clean infected root canals continues. (1)

Image 1 shows the dentinal tubules that are in the root of every tooth, extending from the pulp to the outside of the tooth.  It has been estimated that if these tubules are laid side by side they would extend between 1-3 miles in length, depending on the tooth.

Image 2 confirms what other investigators have reported: the presence of bacteria in the dentinal tubules of infected teeth.  Bacteria have been found to populate up to half the distance of the tubule between the inside root canal and the outside of the tooth.

Image 3 shows that during root canal therapy a smear layer is created that covers the instrumented root canal walls of the tooth.  This smear layer contains inorganic and organic substances as well as microorganisms (bacteria) and necrotic/toxic debris. (1)

Why you should care

According to the article above, root canal infections are dominated by E. faecalis, an anaerobic (oxygen-hating) bacteria that is resistant to intracanal medications, able to form biofilms and able to invade dentinal tubules.  The article also states that, because the presence of bacteria negatively influences the outcome of root canal treatment, every effort should be made to eradicate infections during treatment. (1)

The second reason you should care is that there is research connecting E. faecalis with the incidence of heart disease.  In a paper published in 2014 by the AAE in their professional publication (The Journal of Endodontics) the results showed that ‘patients with chronic apical periodontitis had a 2.79 times higher risk of developing coronary heart disease.’  (2)  ‘Apical periodontitis’ means root canal infection, so the study concluded that people with chronic root canal infections have a 2.79 times greater chance of having heart disease than those that don’t.

To put this in perspective as a health concern, heart disease is the leading cause of death in America for both men and women.  Over 600,000 men and women die from heart disease every year in the U.S., accounting for nearly 1 in 4 deaths.  These are staggering statistics.

According to Dr. Clifford Ruddle, one of the premier educators and trainers in root canal therapy in this country:

In the 40+ years that I have practiced and taught clinical endodontics, I have observed an awakening with the advent of the dental operating microscope, ultrasonically-driven instrumentation, NiTi files, and MTA. Recently, the renaissance has continued with the emergence of CBCT, 3D disinfection methods and the promise of regenerative endodontics.

PIPS is short for Photon Induced Photoacoustic Streaming.  It is part of the Advanced Laser Endodontic Therapy (ALET) that I offer at my practice in Encinitas, San Diego.  PIPS when combined with ozone and SWEEPS, another and more powerful laser frequency, allows us to address the 3 problems listed above by the AAE:

Pips harnesses the power of the Erbium laser to create photoacoustic shock waves, which thoroughly streams anti-bacterial and chelating solutions through the entire canal system.  The canals and subcanals are cleansed and the dentinal tubules are left free and clear of the smear layer (tooth ‘sludge’).

How Effective is PIPS?

The SEM image to the left clearly shows that there are no bacteria present in the tubules after treating the same tooth with PIPS during Advanced Laser Endodontic Therapy.  As you can clearly see the tubules are devoid of bacteria.  This is nothing short of amazing, and I think is going to change how root canals are done in the future.  Frankly, it’s one of the biggest advances I’ve seen in my 34 years as a dentist.

If you or someone you know would like your root canals evaluated, please call my office and speak with Victoria.

You can find out more about Advanced Laser Endodontic Therapy here:  https://myholisticdentist.com/advanced-laser-endodontic-therapy-alet/