Hidden Root Canal Infections and How to Find Them 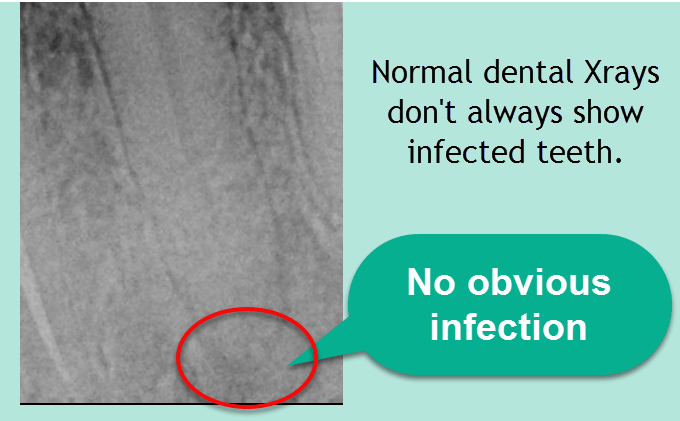 How many times have you had painful teeth or had root canals done in the past? This can result in root canal infections that are not seen on normal dental Xrays and thus may go undetected for years. That is until recently. Because of 3D imaging, we can uncover hidden dental infections that are not healthy and need to be treated so that the underlying infection can be eliminated. This case highlights something that happens fairly frequently, namely infected teeth are not revealed with normal Xrays.

In the image to the left, it is clear that this tooth has decay or a cavity, however it is not clear whether the tooth is infected or needs a root canal.

My question is how many infected teeth are being missed by imaging that is inadequate to uncover these infections? In the absence of symptoms what does one do? By the way, this is the biggest problem with root canal infections whether they are new or you had a root canal done on a tooth 10, 20 or even 30 years ago. In fact the older a root canal, the greater the chance it has become re-infected. What’s insidious about old root canals that are infected is that most of the time are asymptomatic, meaning your infected tooth never hurts you.

In this case it just so happened that we did a 3D scan image for this patient because he had many old root canals that he had questions about. It is very interesting what was revealed when we looked at the image. Please see my post later this week for images from this scan and an explanation of what they mean. Interesting stuff