February: Month of the Rose 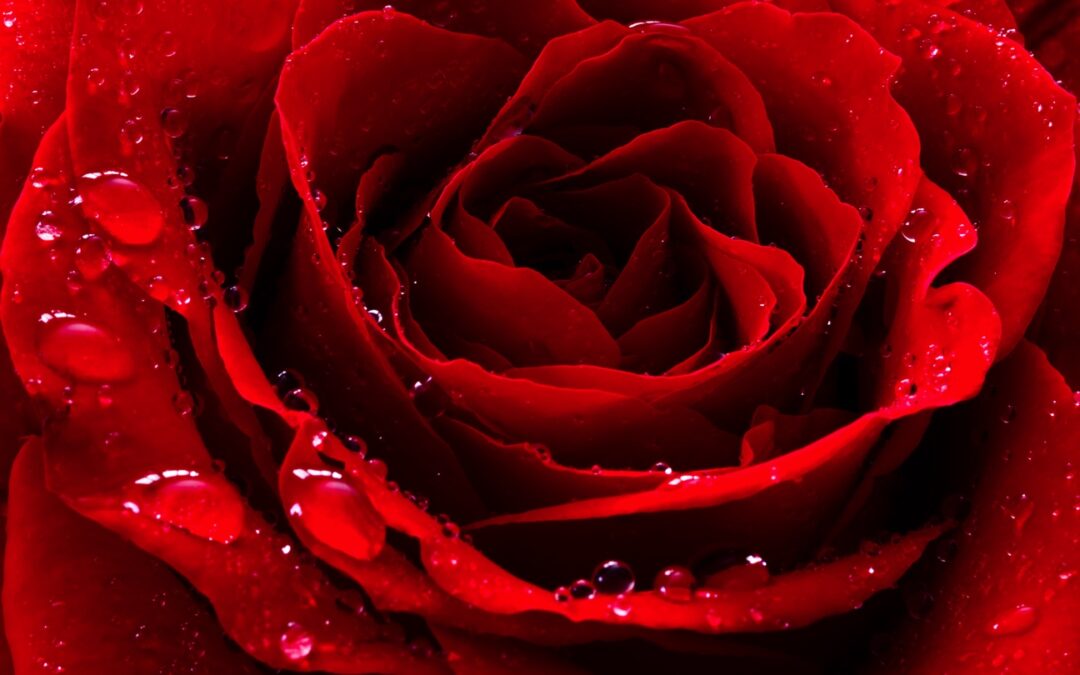 My Love is Like a Red, Red Rose
Scottish Folksong Published in 1794 by Robert Burns

therapeutic. They flourish in our SoCal landscape because they love the warmth. Commercially they are popular for Valentine’s Day and for the most expensive perfumes. Often rose gardenia is substituted for rose because the price for rose essential oils and fragrances can be prohibitive. It can take 10,000 roses to distill a 5 mL bottle of pure rose essential oil or 2000-2500 lbs of roses to produce 16 oz!

The word ‘rosa’ comes from the ancient Greek word meaning red and may have referred to the myth about the rose springing from the blood of Adonis. He was the mortal lover of Aphrodite, Goddess of Love and Beauty. When he died in her arms after a hunting accident, an exquisite red rosebush appeared. A Greek physician, Marestheus, recognized that aromatic flowers can have stimulating or sedative properties; rose is mentioned as being invigorating. The Romans liked to have rose petals strewn liberally at their feasts. When Cleopatra set out to interest the Roman general Marc Antony in 42 BC, she met him in a room filled a foot high with red rose petals.

In 10th century Persia, roses were first distilled into rosewater. The process was further refined by the great alchemist and physician Ibn Sina or Avicenna. He also wrote extensively about rose essential oil. Sometime between 1582 and 1612 rose essential oil became popular after the wedding feast of a princess. A canal meant for the rowing pleasure of the bride and groom was dug around the palace garden  and filled with the intoxicating scent of rose water. The heat of the sun separated out the essential oil and its exquisite fragrance was duly noted. The distillation and export of rose essential oil, also called attar or otto of roses, began thereafter.

Later the Turks introduced roses into Europe. Southern France became the world’s foremost perfume capital and Bulgaria its foremost producer. Even in modern times Bulgaria produces as much as 85% of the world’s rose oil. Rose has been a favorite ingredient in jams and other delicacies since olden days. In India, rosewater is used  in the popular milk sweet known as gulab jamun to this day.

One of the main therapeutic properties of the red rose is its astringency, which the old time herbalists credited with many benefits. It was said to strengthen the heart, the liver, memory and the stomach. The therapeutic constituent is quercetrin, the most widely distributed bioflavonoid in nature, and its most common form, quercetin. Bioflavonoids are antioxidants that help cells to function more efficiently. Another very powerful property of roses are their ability to alleviate psychological distress.In aromatherapy the scent of roses is balancing and uplifting.

Once the rose blossom dies, what remains is the fruit of the flower, the rose hips. Rosehips are one of the most powerful sources of Vitamin C in nature, containing as much as 60 times more than citrus fruit.. Rosehips are rich in bioflavonoids as well, which enhance the body’s ability to absorb the Vitamin C.They are also high in B Complex, Vitamins A, E, C and Rutin, a plant pigment that is a strong antioxidant. Rosehip seed oil has become popular in cosmetic use as it protects and hydrates and fights free radical damage to the skin.. Rosehips also contain  vitamins D, K and silica..