Cavitations are pus filled pockets of bacteria that are in your jaw that can remain for years and decades. They are basically an infection that usually never heals. They are produced in one of the following ways: 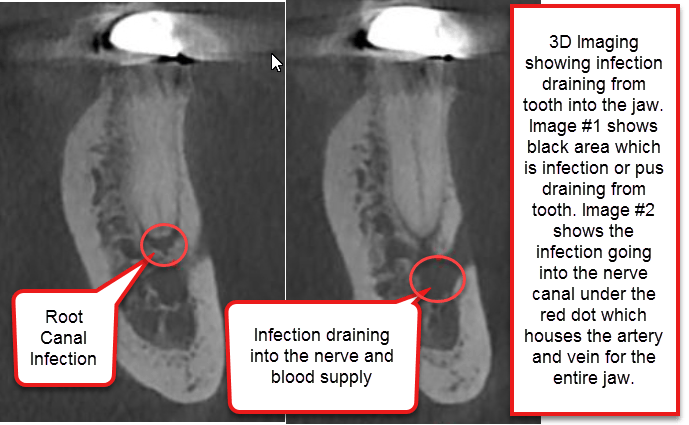 In other words a lot of things can go wrong with extractions and infected, failing root canals. That is why it is important to properly support the body when doing these procedures and during the healing phase.

I can’t tell you how many times I have been told by patients that simple oral hygeine instructions were not given after an extraction was performed. This is so basic yet so important. If the site is not kept clean you very well may get a cavitation, which is basically a whole in your jaw that is filled with some combination of bacteria, pus or dead bone cells.

Any acute condition is bad, but a chronic infection that the body cannot eliminate is bad as well. The immune system has to deal with it 24/7 and it can wear the immune system down over time.

As an example of what can happen with a cavitaiton, I remember a patient who presented with:

She had been on multiple antibiotic regimens, had multiple blood tests done, cultures, and a biopsy of her lymph glands done. When nothing helped or could be found causing the problems she was experiencing, the final recommendation was to do a spinal tap. That’s where she drew the line and said no more agressive tests that showed nothing.

When she refused the spinal tap, it was suggested that maybe she should go to a dentist. That is when I saw her. To me it seemed that her symptoms could be dental related so I took an image called a panorex that shows all the bone of the jaws and the teeth.

What I found was a black hole in her jaw where the wisdom tooth had been. There was the problem literally in black and white. It was a hole in her jaw created after a wisdom tooth was extracted that never healed correctly and had remained ever since. When I queried the patient she remembered that the extractions were difficult and there was a lot of pain afterwards. The right diagnosis was a NICO lesion or cavitation for short. (For a definition please see below.)

The right treatment for a cavitiation is to surgically remove it by:

As you can see, the cure for the problem is surgical but it does not have to be aggressive or risky. There is no other way to get the dead tissue out of the jaw. As with any procedure the proper support is necessary (Please see the support necessary after an extraction as they are the same).

A NICO lesion is short for Neuralgia-Inducing Cavitational Osteonecrosis. The lesion is characterized by insufficient blood flow and bone death in the jaws of patients with symptoms of atypical facial pain or nerve pain. It was first described in the dental literature in 1920 by G.V. Black and soon after Dr Price did his at the time revolutionary research showing systemic effects of infected teeth. This research is still cited in books and is well known even today.