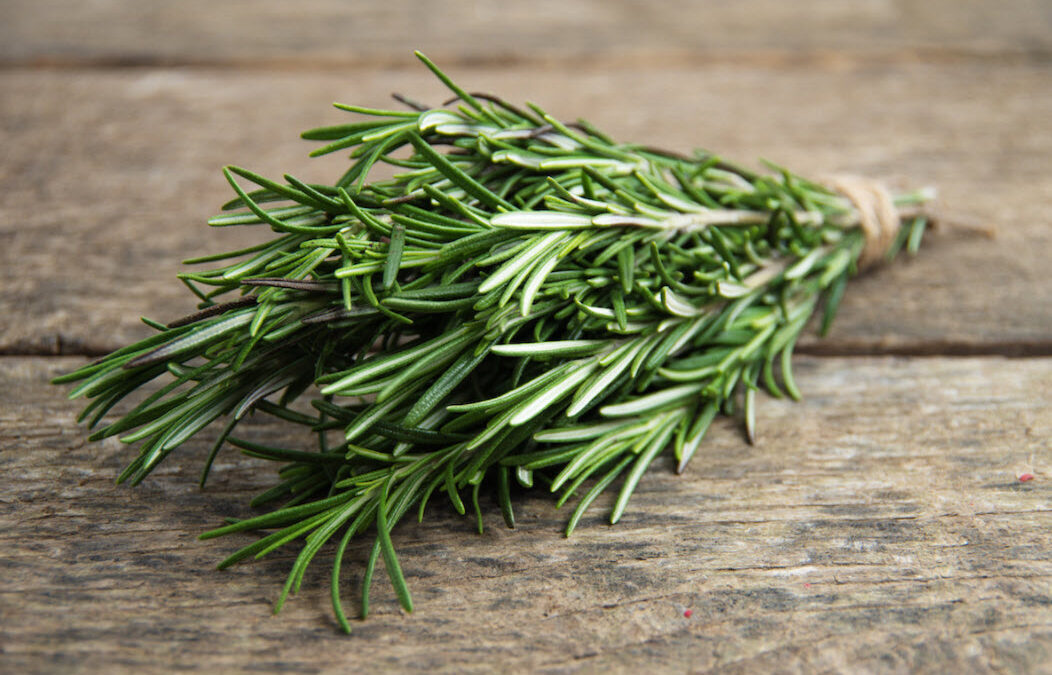 The holiday season is a great time to explore the abundance and value provided by herbs. Herbal medicine has been the go to source for healing all ailments until  very recently in human history. Aside from therapeutic and aromatic uses, herbs have culinary, decorative, cosmetic and practical household uses as well.

Rosemary is one of the most widely used aromatic herbs and is associated with the holidays. It is often used in stuffings or to perk up a turkey, and rosemary potatoes are a favorite. Soaked in bottles of olive oil or used to season rack of lamb, the flavor is associated with Mediterranean cuisine. Its botanical name ‘rosemary’ is Latin for ‘sea’-’dew’;   it grows best by the water, where it was originally found in the Mediterranean region of France, Spain and Portugal.

Today California is one of the leading producers of rosemary. Locally it’s popular as a ground cover or hedge and is often found trailing along retaining walls. Placing fresh boughs of rosemary in a room is said to cool the air. In summer, the woody stems make aromatic barbecue skewers. A simple insect repellent for the garden can be made by boiling and straining the dried leaves.

An essential property of Rosemary is its ability to boost circulation. This accounts for several of its traditional uses. In ancient Greece, students would tie sprigs around their heads to improve memory. “There’s rosemary, that’s for remembrance” is a famous line from Shakespeare’s Hamlet, written centuries later. Besides increasing circulation to the brain, it also can increase blood flow to the scalp, so it is frequently added to shampoos and hair oils. It has also been used as a botanical spray to soften the coats of horses.

Rosemary is part of the famous ‘Thieves’ blend. Folklore tells us that when the Plague was ravaging France during the Middle Ages, some perfumers created a formula that enabled them to rob graves without becoming ill. Recent studies show that rosemary bolsters the immune,  and respiratory as well as circulatory systems, indicating that there may be a factual foundation   to the tales. A cosmetic application that comes down to us from around that time, Queen of Hungary water, is an anti-aging, beautifying blend containing rosemary which is still used today. Rosemary is also said to be an effective water purifier.

A natural pick-me-up, it acts on the central nervous system and has often been used for headaches and migraines. The visionary composer, writer and herbalist St. Hildegard von Bingen (1098-1179) included it in her compilation of early German medicines. She is thought to have suffered from migraines. Because rosemary also enhances cerebral blood flow, there may be no better drug available in preventing Alzheimer’s. As of March 2021, an estimated 6 million Americans suffer from Dementia and Alzheimer’s. Alzheimer’s has been called ‘Type 4 Diabetes’, so rosemary’s ability to lower blood sugar may also be part of its effectiveness.

Because it is antibacterial and antimicrobial, a drop or two added to water and swished in the mouth can help with bad breath and generally tonify the oral microbiome. It is also analgesic (for pain relief), anti-inflammatory, antiseptic, astringent and antioxidant. Because it is diuretic it benefits the kidneys. Because it aids in fat digestion it benefits the liver. Said to be high in vitamins A, C and calcium, it is also said to contain iron, phosphorus, sodium, potassium and zinc.

Rosemary is generally regarded as safe for human consumption by the FDA. It can be used as a tincture, tea, rinse, salve, oil or in capsule or pill form. It has been successfully in the following conditions:

7 Ways to Use Rosemary Essential Oil

In a diffuser or in other uses involving fragrance, its scent is invigorating. It may be applied topically to reflex points or trigger points without a carrier oil

Disclaimer: This herbal health article is not intended to prescribe or diagnose in any
way. It is not meant to be a substitute for professional help. The intent is to offer
historical uses of herbs. Those who are sick should consult their doctor.