What To Do About Old Root Canal Infections – A Case Study 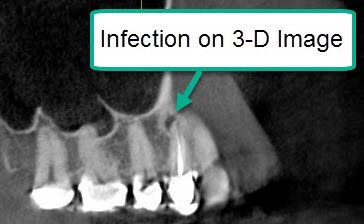 I’m often asked what to do about old root canal infections.  Should I try to save the tooth by doing a root canal, or extract the tooth and replace it with an artificial tooth?  The short answer is, it depends on the situation and history of the tooth.  But it also depends on the health of the bone around the tooth, as well as the overall health of the patient.  When I have a question about the health of the patient and their ability to heal, I will usually recommend a blood test to look at the inflammatory markers: blood sugar, CRP, Vitamin D levels, etc.  This is a good idea whenever surgery is done, especially when the bone is involved and you need good bone healing around your treatment.  This is specifically relevant when you are doing root canals, extractions and implants.  More on this in a future post.

In the coming weeks I will be discussing different situations involving infected root canal teeth and reviewing how we handled each one.  What will become clear is that different situations call for different solutions.  In one scenario the patient may choose to keep the tooth by doing a root canal.  In another situation, the patient may opt to extract the tooth and replace it with a bridge or implant.  A third patient may choose to do nothing and monitor the tooth with ongoing support.  When we are dealing with infected or compromised teeth, the old adage ‘One size does not fit all’ applies.  Our bodies, our teeth and every patient is indeed unique

For those of you who were told that your root canal should last a lifetime, this has not been my experience.  The fact is root canals fail and they usually fail more often than is realized by both doctor and patient.  How do I know this?  Because 3-D imaging called cone beams show more infection with old root canals than has been previously known.

This is because normal Xrays taken in dental offices don’t reveal the infection that’s sometimes there.  After all, they are two dimensional and shot through the bone, so many times infection can go undetected, as it is hidden in the center of your jaw bone.  Remember that during root canal treatment the nerve is removed from the tooth, so you will no longer feel that something is wrong, even if there is infection.

To the right is a normal Xray of a root canal tooth.  The bone around the tooth looks fairly normal, certainly within normal limits for a root canal tooth, as shown with the arrow.  Most dentists would say that this tooth looks to be healthy, as there is no evidence of infection and the canals look well filled.  If there is no pain and no clear indication of an infection on the xray, as is the case with here, most dentists would say the tooth is fine and does not need any further treatment.

However, when we take a cone beam image, which is a three dimensional study similar to a cat scan, the true condition of this tooth is revealed.  No longer can the infection hide because we can see deeper into the bone and with better resolution.  The cone beam has little difficulty revealing that there is a problem.

How many previously treated root canals have similar problems that are being missed with normal Xrays?  For me as a dentist, it is frightening to contemplate.  The good news is that advances made in cone beam technology now make it possible to catch many infections in the jaws around these old root canal teeth that have previously gone undetected.

So What’s the Treatment for Infected Root Canal Teeth?

There are only 3 choices once an old root canal infection is diagnosed:

The first choice is not a very good one in my opinion, as you are leaving infection that drains endotoxins into your body.  Endotoxins are byproducts of bacteria that cause inflammation locally and in your body as they affect your immune system.  Keep in mind that these infections are 24/7 and cause stress on your immune system, sometime for years before they are discovered and treated.

The second choice of retreating the root canal can sometimes be done, although every time you redo a root canal the tooth becomes weaker and the root canal will fail faster the second time.  I am of the opinion that when an existing root canal fails, the tooth should be extracted and replaced.  However, Dr Val Kanter, a board certified endodontist in Beverly Hills, feels that a root canal can be retreated once with good results.  Dr Kanter is an expert in biological and regenerative root canal therapies.  She and I use ozone and a laser in our practice to treat root canal infections.

The third choice is to remove the infected tooth and replace it with a bridge, removable tooth or implant.  In this case the patient chose the option of removing the infected root canal tooth and replacing it with a zirconia implant.  The zirconia implant has the advantage of not having the conductive properties of a metal, as it acts more like a ceramic or porcelain material.  It also is white instead of dark, and the soft tissue or gums really heal well around it.

In the case below you will see a zirconia implant placed two years ago.  Notice how cosmetically pleasing it still is and how healthy the gums look around it.  You will rarely see the gums look this good with a titanium implant.  Patients in my practice always opt for zirconia, as it is generally understood that having metals in the body is less desirable due to issues of conductivity and appearance.  We also support the integration of the implant with nutritional support to promote healing and healthy bone.  An implant is never as good as a God-given tooth, but it comes very close!

All Porcelain Crown Over Zirconia Implant